Where k is a positive constant and y is the displacement from the equilibrium point. Since we have that F=ma we get

that can be written as

We previously found that the general solution to this is

Now let us work with this using Taylor series.

exists. We then have that 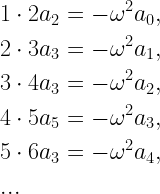 That means that if we know a0 and a1 we have the whole series.

So say we have that the solution should go through the origin. We than have a0=0. That means that every second term will be 0. Say we choose a1=1, that gives us

So what does the 1/ω stand for?  The derivative of the above stand for the velocity, and for t=0 we get v=ω /ω=1.  We could in principle multiply by an initial velocity v0, and that gives us

In this we can recognize